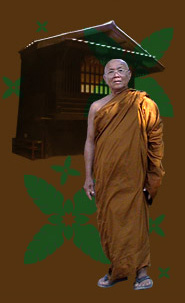 When he was ten years old the family moved to Chaiyapoom province where they were engaged in farming. Shortly thereafter, his father passed away and he had to take responsibility for the work, taking his father’s place.

At the age of 15 he was ordained as a novice but after about two years returned home to help his family. He used to spend all day diligently working in the fields.

The young Kamkee-an studied local animist practices, learning magical chants and verses and how to make ‘holy water’, chase off ghosts and heal sick people with herbal medicines. Because he was skilled in meditation he became a popular ‘spirit doctor’.

During this time he observed the Buddhist precepts strictly and was able to control himself, not letting anger or other un whole-some states overwhelm him. One time when all the buffaloes were stolen from the stable, he remained cool and composed. After he was married at age 22 he continued to live and practice in the same way. At that time L00-ANG POR practiced meditation using the mantra BUD-DHO. He was able to enter blissfully peaceful states of mind but was still not satisfied.

Having lived the family life for 7-8 years, he started searching for a suitable teacher. In 1966 he heard about Luangpor Khamkhian Suvanno who was then teaching in LER-Y province. The way of practice as taught by Luangpor Khamkhian Suvanno was quite different from the way he had practiced before but he decided to give it a go. Having practiced for one month he saw results and understood the heart of the teachings. He gave up superstition and magic.

Having left doubts behind him, he decided to take ordination of despite his remaining domestic responsibilities.

This was in 1965; he was almost thirty years old. From this point on he was able to fully commit his time to practicing with L.P.Tee-an, and after three years a realization took place which changed his life permanently.

LOO-ANG POR followed Luangpor Khamkhian Suvanno for many years and helped him spread the teachings, particularly when they spent a rains retreat together at a well-known monastery (Wat Cholapratahn) close to Bangkok.

When L.P.TEE-AN was invited to establish Wat Sanahm Ny in the outskirts of Bangkok, LOO-ANG POR was one of the pioneers to take part in building work and leveling the ground.

Then in 1976 he took leave to go and spend the rains at Wat Pah SUGATO in Chaiyapoom province.

Luangpor Khamkhian Suvanno is now abbot of the nearby Golden Mount Monastery and looks after SUGATO Forest monastery as well as a remote monastery in a forest reserve called Wat Pah Mahawan.

He is the head monk of the region, has been given a title and is a preceptor (one who may give ordination). His main work is to teach insight-meditation and the development of awareness, teaching all over Thailand and on a number of occasions in America.